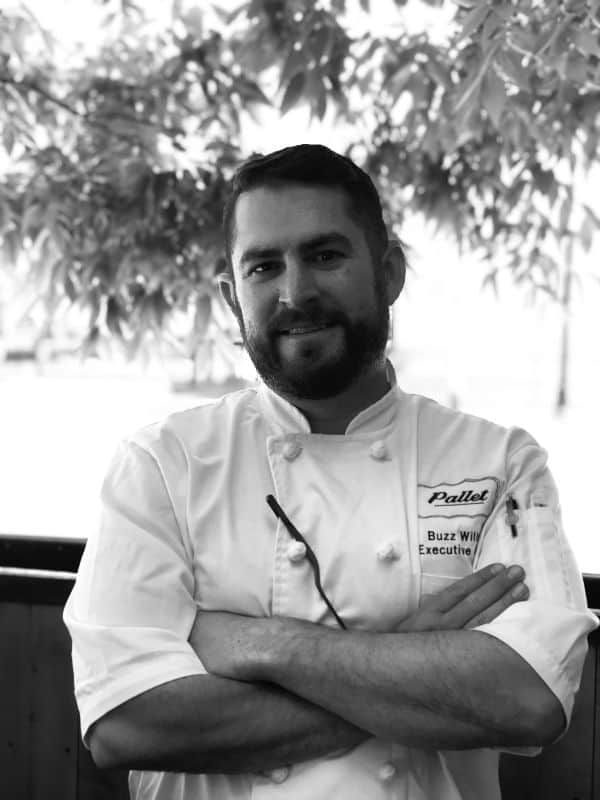 For Buzz Willey, the story is classic: he grew up with the warm, embracing aroma of his Italian grandmother’s kitchen and nurtured a lifelong passion for cuisine, which led to culinary school and culminated in opening a restaurant. Now, 8 years later, Buzz’s restaurant Pallet is an award-winning hotspot in a city where the culinary scene is booming. He says, “It’s amazing to be part of it, a city that’s growing and so many great chefs coming up.” He says that in the restaurant business, a cook will stay with you a few years, learn, and move on. “It’s a lot of fun watching them grow and seeing what they do.”

In a fast-growing restaurant scene, how does Buzz create a menu that stands out? As you would expect, it’s based on classic principles: use the freshest, brightest ingredients for the best flavors, and make what you love. In Utah, because there are four seasons, Buzz says always using ingredients that are in season means the menu is always changing, and finding new and better ways to make your favorites means they’re never boring. Buzz says it’s a team effort, where all the chefs consider what’s in season and environmentally sustainable. He says, “Then I ask them, what did you grow up eating? What are you comfortable cooking? And we’ll go from there.”

The menu at Pallet changes 4 to 8 times a year. The flexibility lets them make changes depending on seasonal availability—and lets the culinary team stay creative. “We change it when we want a change. We’re not stuck cooking the same things.”

For home cooks, Buzz says, “Cook what you like and want to eat. You’ll get better at what you’re doing, keep trying—and taste it while you’re cooking—you’ll improve on the things you cook.” He says to use seasonal foods, which will force you into trying new things.

“I’m a giant fan of the farmers’ market, and they’re all over Salt Lake and Park City,” says Buzz. He also likes the Tagge’s farmers’ carts and Asian and Hispanic markets. His tip for shopping at the farmers’ markets? Don’t limit your shopping to produce. Look at fresh meat, cheese, eggs, and honey. He mentions Morgan Valley Lamb, Frog Bench, Top Crops, Drake, Clifford, and Bread Riot (“go early, before 9:30”), but recommends you “explore the whole market!”

And now, what you’ve been waiting for, Chef Buzz’s fall recipe that reminds him so much of his grandma and the warmth of her kitchen: “It’s really fun to let something go for 4 hours—the aroma fills up your house”:

Method:
Preheat your oven to 275°F, peel and rough chop the first 4 ingredients and set aside. Season the lamb shanks using just the salt and pepper, applying a healthy amount of each. Heat up a large rondo or large skillet, add oil and sear the shanks thoroughly and place in a deep pan. Deglaze the rondo or skillet using the veal stock, red wine, and balsamic vinegar. Once the liquid has come to boil, pour it over the lamb shanks (should almost cover the shanks), and add all the other ingredients. Cover the pan with parchment paper and tin foil and place in the oven for 4 hours.
Pumpkin Puree
2 c dice pumpkin
½ onion julienne
6 garlic cloves
1 Tbsp butter
1 Tbsp sherry vinegar
1½ c cream

Method:
In a large sauce pot, sweat the pumpkin, onion, and garlic cloves. Add the butter and sherry without browning the vegetables and add cream to cover the mixture. Simmer for about 15-20 minutes or until veggies are soft, blend thoroughly in Vitamix or similar.